Today we played. Snowshoes, skis, and sleds (both powered and not). It’s been a good day.
All my dreams have come true.
When my mind is wandering and my heart is dull, I walk through the snow lit woods. There I find solace in making a trail, all the while knowing it will be covered again by the wind. I suppose that is what I go to the woods to remember. That life comes and quickly goes. So instead of striving to leave a mark on the world, I’ll walk peaceably and presently through the world I’m living in.
Journeyed north to Montréal’s Norte-Dame Basilica today. Breathtakingly beautiful to say the least. We stood in line waiting for the visiting hours to begin, and right on time the gates squeaked open. Yet when the gates were opened, those in line before us stood still. Ashley leaned over and whispered to me, “the gates are wide open, but no one knows what to do.” I suppose that’s the gist of what I think about religion these days. The gates are open, but none of us know what to do. I suppose we ought to mosey on in to life for a while. Stand in awe at its beauty and magnificence. Walk in and take a seat, undaunted and without fear. Heck, take a picture and share it with others. Tell someone the good news that life is beautiful, open, and free.
Today I’m shopping for words. Crunch time. #prayersaccepted
There are places along the path of parenting worth stopping to enjoying the view. Proud of the hard work put in since early summer by this kid. Intentional and diligent work = goal accomplished. NY State champions.

A year ago I reflected upon our life-transition in a post titled, Homeless and Unemployed. In the spirit of Epiphany, it seems this is a good time to share a few revelations we have experienced over the past year. 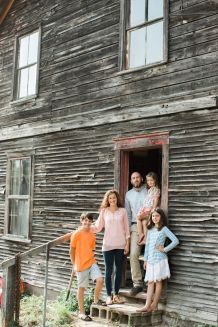 Some background: Two years ago we moved our family of five out of the suburbs. We had no specific plan. Only hopes and a vision of owning land that would perhaps teach us something new about life.

We had become disillusioned with the duplicity readily recognized in our life and others. We desired to find something more rooted and grounded, something more simple and real – and we were drawn toward the agrarian life. Both Ashley and I grew up around farming…and we knew its inherent earthiness could serve as a re-formation school for our lives. We had no idea how to make it happen…but with a unanimous vote from our three children…we pushed all in. We resigned our jobs, gave away most of our belongings, sold our house, and moved to the Adirondack mountains of New York.

We lived in the garage of Ashley’s parents…it was both a life-changing gift and a humbling process. Such a mix of emotions with every turn into the driveway. We were incredibly thankful to have a place to live while we searched for jobs and learned the area – but with every passing month we were increasingly aghast with the feelings of failure. What we thought was a few week arrangement turned into an eighteen-month move-in.

But then it happened. I don’t have the space here to write out the full story. Parts of the story are nearly unbelievable. Things fell into place as they say. Finding meaning in our move began to be easier. And then, with unforeseen Provision, we purchased a 50-acre farm in need of restoration. It was as if the agony we endured in making the decision to resign, the angst of wandering, the anxiety of shame…they were merely illusional shadows on the path of faithfulness.

We no longer had a title or position to hide behind, we had no paycheck to numb our pain, we had nothing to give or to invite others to join, and we were left with only the growing awareness of ourselves. It was in those moments we identified how we did not want to live. It was those months that revealed the implicit intentions of the dominate narratives that had dictated so much of our lives. We had to do more than identify the mindless consumption and want that controlled hours of each day and the scripts of anxiety and shame convincing us of our worthlessness…we had to resist them, relinquish them, and to replace them with new scripts.

In a recent conversation, Walter Brueggemann reminded me that “we are all in the process of changing narratives. That is the work we are tasked to do.”

For the past year we have lived into a different story that I will attempt to share here over the next week. It’s these new narratives that encourage us to continue forward. Like migrating animals who instinctively return to the same home each year, we are becoming homed to these new scripts. We are awakening from our slumber and learning to lean into the new thing God is doing. We are being homed to the boundary-less Kingdom. Homed downward to the everyday details of the good life around us. Homed to the image of God in the face of others. Homed to celebrating love as the existence of God.

And being homed in such a way provides a new kind of employment.

It’s that new work that I will share about over the next few days. The work of the land, the work of community, and the work of enough.

3 thoughts on “Homed and Employed.”