If you’re looking for a time to come visit Saranac Lake, put Winter Carnival on your calendar. It’s cool - actually brutally cold - but a fun week.
Twenty below last night, but a beautiful sunny day today. #homestead #carhartt #daughters
It’s late. And cold. Too cold for new kids to be born; but an ambitious billy jumped the fence five months ago. Add taller fencing to the list of lessons we rookie homesteaders are learning. But nonetheless, amid the cold and late, our middle child shows herself dedicated to her goats. I suppose it’s a kind of love that motivates her care. Early mornings and late evening; milking is a serious chore. But without complaint she is the first out the door. Tonight I’m grateful for joy found in one’s struggles. For love. And even for our pesky billy goat.
Two things I’m thankful for on this winter evening; a tractor to move the snow and a teenage son who loves to work.
Today we played. Snowshoes, skis, and sleds (both powered and not). It’s been a good day.
All my dreams have come true. 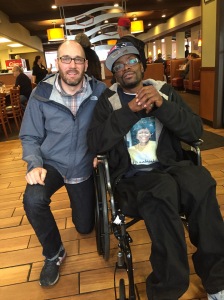 I met Will in a hospital hallway. According to him, my first words were, “What’s your story?”

In many ways, that question has been the heart of our relationship. Him, while helping me hear and see a different view of life, painting a picture of what the world and its powers looks like in the eyes of another.

I’ve met a lot of people in my chaplain and pastor life. Heard a lot of stories. But none like Will’s. As I have sought to listen to his story…Will’s words have changed me.

There was a day when Will was part of one of the most feared gangs in KC. When Will was 19 he was shot in the back over a drug territory dispute, and as a result, paralyzed from the waist down. A year later, while in a wheelchair, he participated in another shooting and was consequentially convicted of 2nd degree murder. Will completed a 12 year sentence, and for the past few years has begun to find a new life.

A black man, a convicted felon, a paraplegic…the labels of society can’t push him any further down. But that’s not the man I know.

Will lives every day in both fear and guilt. Fear of the simmering anger in the lives of those he has hurt in his former life. Shame and guilt covers him at times to the point that he can’t speak for hours. Anxiety takes over his body and completes his paralyzation.

But then there are moments like this past Sunday. As we sat in Denny’s eating breakfast there were hints of joy, laughter, and a confessive storytelling that sounded more reflective than reactive to the shame. He speaks with wistfulness about his family. He smiles with pride when telling about his grandmother who moved to KC from Shreveport, Louisiana in pursuit of a better life. He cries with pained memories about his beloved mother who became victim to abuse by men and drugs. It’s obvious he loves deeply. It’s clear he longs to live a different story.

Will often says he hopes to write a book. I asked him what he would say. He quickly responded with “I want to tell how in only three generations my family went from hope and freedom to a hopeless and disintegrated kind of life. I want to speak about the powers that seek to leave us there. I want to give hope to those who think all is lost.”

I am grateful life brought us together in a hospital hallway.  I am sure there’s much about Will that I have yet to learn, much about his life that I can’t comprehend. But there’s one truth I know is true: He is my brother and friend, whom I love.

*It’s with Will’s permission that I tell a little of his story.